The Arvada Peace Vigil, newly renamed Colorado Citizens for Peace, held a 7th Congressional District candidate forum today at noon. The Vigil meets every Saturday at the intersection of 52nd Avenue and Wadsworth Boulevard to raise awareness for peace in Iraq.

Dave Chandler, Green Party candidate for U.S. House of Representatives for the 7th CD spoke and answered questions at the event. Also speaking was Herb Rubenstein, contesting for the Democratic nomination in the August 8 primary against Ed Perlmutter and Peggy Lamm. Lamm sent a spokesperson, but though the Perlmutter campaign said it would send a representative, it didn't.

Below find the text of Chandler's remarks. 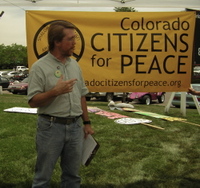 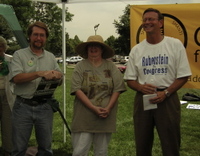 Always remember this: The best way to keep the peace, is not to start wars.

My name is Dave Chandler and I’m running as the Green Party candidate for the U.S. House of Representatives for the 7th Congressional District because of a cause -- the cause of peace and justice. ...