You Can Vote to Stop the 'Culture of Corruption' 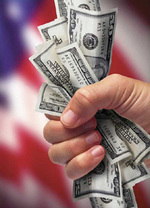 In Colorado's 7th Congressional District -- the most campaign money ever spent for such a race in the state's history.

Perlmutter is all excited that Bill Clinton is coming to town a week before election day to facilitate an "infusion of cash". But sharing the stage with Perlmutter and Clinton will be Ken and John Salazar, both of whom voted for the odious so-called "Military Commissions Act" that gives a green light to torture and undercuts habeas corpus. How can Perlmutter even stand on the same platform as politicians who would vote for this anti-American legislation?

All of which proves the point that the "culture of corruption" that has permeated our politics and government is thriving here in the 7th Congressional District. The current scandals plaguing the House of Representatives are evidence of a system that cannot even recognize the genesis of the rottenness underlying this political decadence: the neverending scramble for more and more money to keep themselves in power.

It is a simple 'inconvenient' truth -- if you vote for either of the two big party, big special interest candidates, you enable and perpetuate the present corrupt system.

In the race for U.S. Representative in the 7th district you have a chance to really make a difference -- vote for Dave Chandler and send a political earthquake throughout the corrupt political and governmental establishment in this country.

Dave Chandler has signed the "Voters First Pledge" ... because it is way past time to clean up Washington and put the people back in control of our own government!

Added together, the campaigns have raised $4.5 million - more than any campaign for an open Congressional seat in Colorado history.

Prior to Friday, the most money raised in the state for an open seat had been $2.9 million.

... Perlmutter expects a boost in fundraising and morale when former President Clinton flies to town to stump for him for a couple of hours Nov. 1.

Posted at 09:54 AM in Issues - Stopping the Culture of Corruption | Permalink