Be a Peace Voter Today

The one candidate running for the U.S. House in Colorado's 7th Congressional District committed to advocating for a quick withdrawal of American troops from Iraq.

Be a Peace Voter for Dave Chandler. 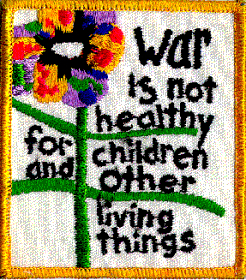 Posted at 09:27 AM in Colorado 7th Congressional District | Permalink | Comments (0)

Vote to 'Renew Our Republic' Tomorrow 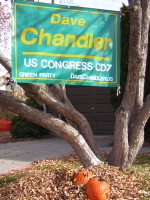 Colorado citizens of the 7th district can vote their conscience and convictions and make the United States a better place tomorrow.

First and foremost, I am the one candidate for the U.S. House in this district who has pledged to advocate in the Congress for a quick withdrawal of our troops from Iraq. If the profound issue of war and peace is a matter of conscience for you, then my candidacy offers you a place to be true to your beliefs.

On the range of other issues confronting our nation and the residents of the 7th district, I have been able to express my principles and my sense of what people are concerned about in an honest, straightforward manner because I have been free from the corrupting influence of big money 'politics as ususal'.

You can explore this web site and read for yourself about my perception and response to the issues of the day. I believe you will find my positions thoughtful, well reasoned, and genuine ... even if you happen to disagree with them. If anything else, this campaign has been about showing how rejecting the current scandalous system of campaign financing can bring honor and integrity to our politics.

This is not just about 'fighting the system' ... it is about personal responsibility. The big party candidates lament the 'system', but then eagerly participate. The link below to a report in today's Denver Post demonstrates this hypocrisy. Ninety percent of the dollars raised from special interests goes to negatives ads that proclaim "I'm (name of candidate) and I approved this message" -- but the Colorado Democrat chairwoman bemoans "What do we do about this?"

Well, candidates can do what I did -- just say no to any contributions from special interests.

If we want to make our politics and government more representative and accountable we can also start demanding that all candidates be allowed to participate in the election process -- especially when they have the courage to stand on their principles. One of the low points in this 7th Congressional District campaign was when the Jeffco League of Women Voters, which subscribes to the position that big money is corrupting our politics, set a criteria for participation in their forum that a candidate "must show evidence of a significant level of financial support." Shame on them.

The results of this kind of double standard that the big parties and their candidates (and groups like the Jeffco League) practice is exemplified by the link below to a Rocky Mountain News column authored by Tina Greigo. More and more Americans don't believe that it matters to vote and sadly they come to this notion based upon the behavior I am describing here. Special interest campaign contributions and excessive lobbyist influence has led to skepticism that our government even remotely works for the people anymore.

Voting for me is a bold action to renew our Republic, to have faith in the principles and beliefs about liberty and democracy as articulated in the Declaration of Independence and the Constitution. We can reject the corrupt 'politics as usual' and courageously pick instead 'Principle Before Politics'!

I will appreciate your vote ... and so will America.

If you think this campaign season is the dirtiest ever, you might be right. In Colorado, roughly $9 out of every $10 spent on congressional campaign advertising by the national political parties has been for negative ads against opposing candidates, about the same as the nationwide ratio, according to a Denver Post review of Federal Election Commission data. Nationwide, the Democratic and Republican parties have spent $160 million on ads attacking congressional candidates, as opposed to $17 million on positive ads about each party's own candidates, the FEC reported last week. ...

... "This is one of the worst years I've ever seen, with all the mean-spirited, nasty distortion of people's records," said Colorado Democratic Party chairwoman Pat Waak. "Every time I turn around, we have candidates coming to me asking, 'What do we do about this?"'

Eddie's not voting again this year. This is not Longtime Eddie of Border Street. It's my neighbor Eddie. Contrarian Eddie. Or as he prefers, Crabby and Cranky Eddie of northwest Denver. The man who is such a pessimist that, at 71, he relishes the idea that he doesn't have much time left.

... Eddie looks at politics through the prism of economic class, and, to a lesser degree, age. His is a discontent wrapped up in fat CEO benefits packages and white-collar criminals who get off easy. It is fueled by the belief that he has been betrayed by elected leaders from Nixon to Clinton, by the sight of veterans reduced to begging on street corners and President Bush rolling up his shirt sleeves on the stump - a mockery, Eddie says, of every working person struggling to make ends meet.

"My philosophy is that the government makes laws and they should abide by them. Everybody. I don't care what your race or gender or religion or whatever. I don't care if you are poor or wealthy. The laws should be for everybody, not just a certain few. And that's not the way it is.

You can view Dave Chandler in the 7th Congressional District debate sponsored by KBDI-TV, the Rocky Mountain News and Channel 4 -- online.

Before you vote -- know the issues -- see and hear all of the candidates.

The photo gathering was held to highlight Global Warming International Day of Action.

The event was held yesterday at Parfet Park in downtown Golden.

UPDATE! Aerial photo of participants with blue umbrellas spelling out "Save Our Snow". 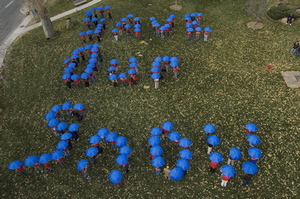 PHOTOS BELOW
1) Dave with polar bear.
2) Dave Chandler address the gathering about his pledge and commitment to deal with global warming.
3) Hannah Chandler, Dave's daughter, expresses her commitment to the Earth's environment, too. 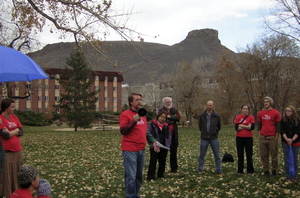 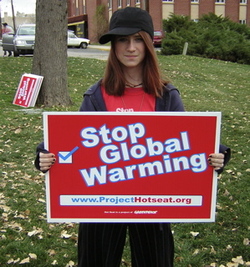 Dave Chandler, candidate for Congress in Colorado's 7th district said today that we must find a way to insure affordable health care for all Americans.

"We're going to witness a lot of "gottcha" politics in these closing days of the 2006 election," said Chandler. "But I'm going to keep talking about important issues."

"Everyday I'm hearing more about the big problem with the cost of health insurance and the bureaucracy of getting prompt and thorough medical service. The cost of health care is getting so out of hand that families are being forced to stop making contributions to their retirement accounts in order to afford the health insurance premium. How much sense does that make?" (News report below.)

Chandler said that if he is elected to the U.S. House, he will support the single-payer idea as a good starting point from which to build consensus for a program that will be beneficial for all Americans.

"I've heard so many stories of folks having a difficult time paying for prescription drugs, hearing aids, preventative care, mental health, unexpected illnesses. We've just got to do something soon, or we are going to have a serious, serious health care crisis."

"Let's be open-minded about the various ideas for getting our health system in order. The worst thing we can do is take a hardened, ideological position right off the bat. Too many good, hard working citizens are suffering ... there has got to be a solution if we work cooperatively to find one."

Dave made this important point: "Unlike the big party candidates, I haven't taken and never will take any campaign contributions from the insurance industry or the doctor's lobby or the drug manufacturers -- I am free to look for the best proposals that will work for all the people. I won't have to be worried about offending some potential big contributor now or in the future. I can put good ideas based on solid principles ... before politics."

Single-payer national health insurance is a system in which a single public or quasi-public agency organizes health financing, but delivery of care remains largely private.

Currently, the U.S. health care system is outrageously expensive, yet inadequate. Despite spending more than twice as much as the rest of the industrialized nations ($7,129 per capita), the United States performs poorly in comparison on major health indicators such as life expectancy, infant mortality and immunization rates. Moreover, the other advanced nations provide comprehensive coverage to their entire populations, while the U.S. leaves 46 million completely uninsured and millions more inadequately covered.

Health-care costs are increasingly vying with retirement contributions for a piece of the household budget. More than a third of Americans squeezed by higher medical costs say they've reduced their contributions to retirement and other savings accounts in response. Thirty-six percent of those who've seen their health costs climb in the last year report they've decreased their retirement savings compared with 25% who said so in 2004, according to a survey of 1,000 adults from the nonprofit, nonpartisan Employee Benefit Research Institute (EBRI). More than half -- 53% -- say they've ratcheted down other savings.

Paying for higher health costs resulted in other financial struggles more often as well, with 28% saying they had trouble paying for basic necessities this year vs. 18% in 2004. Difficulty covering other bills affected 37%, up from 30% two years ago. ...

A Fresh Approach for the 7th Congressional District

Voters in Colorado's 7th Congressional District are beginning to look for a fresh face and a new, principled way of doing politics and government.

Dave Chandler, candidate for U.S. House in the 7th CD, said today that he is moving up in the 9News poll because voters want more honesty and integrity and straight-talk from people running for office.

"It's not much, that's true," said Chandler. "But I do not take any special interest campaign contributions and that means that I have not spent millions of dollars on negative television ads and nasty mailings. Frankly, I think more and more voters like my approach."

"I'm for campaigning based on issues and speaking your mind," Dave said. "I want U.S. troops out of Iraq quickly. Even if you don't agree with me, you know where I stand. What does Perlmutter's 'redeployment' mean? Where is O'Donnell going to find 75,000 more troops to send into the Iraq quagmire?" 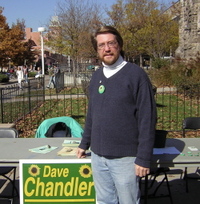 "I'm for taking global warming seriously and adopting strong conservation measures. After all, we've only got this one planet to live on, it only makes sense to keep our environment clean and healthy. Reducing our dependence foreign oil and fossil fuels is good for our country and the world."

"I'm for cleaning up our government, too. No person elected and employed by the people should be taking gifts from lobbyists, period. And if we get the demands of the special interests out of politics and the government, we can balance the federal budget and have a more open and more honest democracy."

Dave Chandler says this to the voters of the 7th district:

"We can change this country if you will reject the 'politics as usual' that is represented by the Democrat and Republican candidates. Do the right thing and vote your conscience and convictions -- vote for Dave Chandler and principle before politics this year."