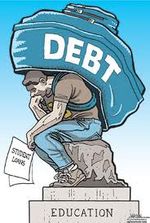 It is so important for young people and their families to understand just how out of whack the system of higher education has become in 21st century America.

From a four million dollar a year football coach to tuition increases going up and up and up -- college is becoming an educational option that is ridiculous on its surface and mostly an initiation into decades of personal debt.

I cannot say enough about the value of actually being educated ... it produces a quality of life that transcends just how much money one can make. Nevertheless, there has got to be a change in what is going on in the higher education arena. The present trend to debt slavery for college students, inadequate curriculum, and obsession with college sports is not a prescription for a brighter future; this direction is truly another signal of national decline: confusing the idea for the actual thing.

So, as I have opined here before, remember, college isn't for everyone. There are many different alternatives for young people. As usual, most Americans know this in their gut -- but the politicians and the one percent never hear what we are saying -- all they can want are profits from the student loan interest and football ad revenue.

I Said No to My Student Loan: One Borrower's Decision to Stop Paying | Natalia Antonova/AlterNet.org

I am aware of the total lack of consumer protection associated with student debt. But I took a long, hard look at the numbers, and I realized that I am already a slave.