No More Money for Schools Until There is Change! 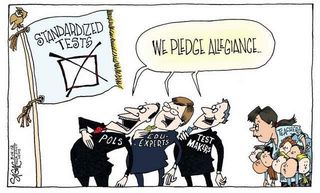 What an indictment of so-called education "reform" contained in an essay on the editorial page of today's Denver Post.

The article contains this amazing sentence:

Now, understand what this means -- those young high school graduates -- who are sufficiently motivated and smart enough to know that a college education is advantageous to their future prospects are yet not skilled enough to actually begin a course of higher learning.

After all those years of CSAP testing, school report cards, student tracking ... after all the federal money for contriving 'core curriculum' and data gathering standardized testing central computers, we still have 42 percent of community college students who need to take high school course work again? (This number doesn't include high school students going to other private and public colleges and universities -- so in all likelihood up to half of all entering students need remediation. This statistic also makes one wonder how disadvantaged are all those young folks who chose not to go to college and therefore don't get remediated to 12th grade reading, writing and arithmetic levels?)

So ... just what is all this 'reform' aimed at three weeks of standardized CSAP testing every year for ten years doing? The deep flaws of this high stakes testing regimen are now blatantly obvious.

You have to shake your head and wonder why after twenty-plus years of 'accountability' education reforms with this kind of result -- why are the educrats and politicians so adamant that public and charter schools stay on the same pathway of failure?

But they are and, in fact, they are doubling-down on the failed agenda by now linking teacher employment to the standardized testing rat hole.

Here in the Jefferson County School District the governmental education establishment has put on the ballot for this November a big request for more of our money to pour into this obviously inadequate and failing system. At some point, one just has to say that it is a waste of money to keep funding an organization that cannot fulfill its primary function and that insists on doing the same wrong thing over and over and over again.

The community colleges are doing what they must, I suppose, since they have to accept high school graduates as students -- so they are to be commended for their undertaking of the remedial programs. But what a waste of effort and taxpayer dollars it is for something that the public/charter school system is supposed to have already done.

It is time for courage and bravery from parents and taxpayers in Jefferson County and probably everywhere else where this situation has developed -- grit your teeth and be determined to do what you must to ensure your own child's education -- and vote 'NO!' on sending anymore of your money to an education establishment that will not change and do the job it is mandated to do.

It is human nature ... the higher the stakes, the more ingenious will be the efforts to get the results that benefit those with the most to win or lose.

Such is the case with the standardized testing regimen that has taken over and become the spear's tip of the so-called education "reform" movement.

This annual public and charter school multiple day test (CSAP/TCAP in Colorado) has become the foundation for a school's "grade"; for the school's future funding or very survival; for "tracking" students; for extracting all kinds of bureaucratic data; for judging administrators; for evaluating teachers and how much they should be paid or if they should even be employed; and most importantly of all -- for giving elected politicians something to point at to prove they are holding the schools 'accountable'.

So, among many examples of how the standardized testing scheme has failed, what is the latest verdict on this "reform"?

According to the article, the survey offered these results:

Now think this through ... in whose interest is it that students do well on these tests?
-- Students? Well, of course, all kids want to get a high mark and make their parents proud.
-- Teachers? Well, yeah if they want to keep their job and/or get a raise.
-- The school administration? Well, they want to look like they are succeeding and if they want to win in the next tax hike election.
-- The elected and appointed politicians? Well, they need to show that after a two and a half decades of billions and billions of dollars thrown into education "reform" they are seeing positive results.

There is one way to get the desired results when it all boils down to one big test: make sure that almost every student can do well on the test.

In other words, don't make the test too hard ... and that means making most of what is taught in the classroom easy for the vast majority of kids to understand and be capable of regurgitating during testing week. And that is exactly what the survey published by USA Today demonstrates is happening in your public schools.

And dumber kids means what for the future of the nation? Well, this poster gives an indication ... 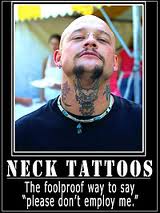