Every now and then -- despite the best efforts of government insiders -- the people can become informed and exercise their sovereign power. The AFPD board should take this rebuke as a message that trying to 'sneak' one past their constituents is not appreciated.

It is an affront to the principles of our republic that an election on a 'charter' question results in such a small turnout of the tens of thousands of potential AFPD voters who are its taxpaying funders. In this case, the AFPD board failed in living-up to the standards for an institution of a representative democracy.

The governing board of this district, in order to retain credibility, must do more to be transparent and must make renewed efforts to inform the community broadly of its governmental activities and policies. The AFPD governing body should encourage greater participation by those who would be interested in and affected by its decisions.

An edited version of this article was published in YourHub/Denver Post for Arvada, Westminster, Wheat Ridge on Thursday, May 2, 2013.Another 'Troubled' Arvada Fire District Election

Somethings, especially in government and politics, are exactly what they appear to be on first glance.

Such is the case with the special election being held on Tuesday, May 7 to eliminate term limits for the Arvada Fire Protection District's (AFPD) board of directors.

Here it is: no term limits means a small clique of 'insiders' could run this faction of government for years and years.

This is the ballot question:

SHALL THE TERM LIMITS THAT APPLY TO THE BOARD OF DIRECTORS OF THE ARVADA FIRE PROTECTION DISTRICT PURSUANT TO ARTICLE XVIII, SECTION 11(1) OF THE COLORADO CONSTITUTION BE ELIMINATED?

Notice that present term limited AFPD board members become eligible to run in perpetuity -- if this were indeed a civically inspired reform proposition, then incumbents would not have given themselves an exemption, but would have abided by the law under which they were first elected. 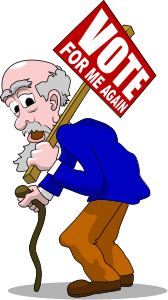 Current board members may perceive themselves to only be concerned for the good of the community and engaged for the best interests of the fire department. But this isn't necessarily about individuals, this is about how government is conducted, about instituting checks and balances that ensure government is kept honest and accountable to the citizens. Over time even the best of well motivated public officials can become convinced that they are indispensable and that government cannot get along without them.

Term limits is one device that the people have utilized to keep control over government; it would be a mistake to let go of this tool with the Arvada Fire Protection District board of directors.

In fact, it may be even more important to have term limits for a level of government so scarcely noticed as a fire district because the inclination will be for the same folks to run over and over again ... perhaps due to lack of interest by those who might be candidates. Term limits guarantee that at least occasionally a new face has to be elected.

But there is also a troubling aspect of how this current board of directors has arranged this special election. The resolution putting the elimination of term limits question on the ballot was approved on January 7, 2013 -- over three months ago. Yet the first most Arvadans heard about this was in the city's publication The Arvada Report that contains updates of AFPD activities. The fire district itself never put out a press release about this special election; and until last week there weren't any reports in any of the local newspapers about this plan -- just silence.

Well, I'll tell you. It is rather difficult to organize opposition when people have only three or four weeks before election day. Board members and supporters of this issue will undoubtedly argue that they have obeyed the letter of the law and that is undoubtedly true. But it doesn't take a political genius to figure out that politicians and government insiders will usually do what accrues to their own political advantage.

Now, what is the argument in favor of eliminating term limits for the AFPD board of directors? Ostensibly it is because no one else but incumbents or fire fighter government insiders want to seek election to the the board, we should just let incumbents run forever.

Indeed, the last board election in 2012 was cancelled and the only two individuals who filed to run were thereby 'acclaimed' into office without a vote of the people. Yup, that is legal ... it is anti-democratic and antithetical to the very principles of a republic, but it is permissible under state law for some governmental districts under those circumstances to abandon an election in the name of saving the cost of candidates being ratified by the voters and taxpayers.

So for the AFPD board this is the solution to lack of competitive races: let an incumbent run for a third, fourth or fifth term -- 'Hurrah!' for incumbency.

But the AFPD board of directors is wrong, just flat wrong to even offer eliminating term limits as a solution.

The right thing to do is adopt policies to make the government of the AFPD pro-active in encouraging citizens to seek election to the board. Instead of waiting until the very last legal moment before notifying the pubic of upcoming elections, the AFPD government should regularly and prominently encourage citizen involvement in the affairs of the board and in the possibilities of winning election to the board. Instead of being secretive and defensive over AFPD governmental actions, they should welcome differing points of view and citizen oversight.

But that is not what the AFPD board is doing in this special election. And here it gets even worse for their position. There will be only one polling place for you to cast your ballot (this is a large district with tens of thousands of eligible voters) -- and it is not at a fire station, it is in the government offices of the fire district. Does that sound very inviting if you oppose this election question? Furthermore, you have to apply to get a mail ballot and you'd better hurry because the deadline for receiving applications is April 30.

Oh, and guess who is counting the ballots? No, really ... guess.

Does this sound like a government that is going the extra mile to encourage voter participation? Or does it sound exactly like what it appears to be on first glance? ---- A small cadre of government insiders doing what they can to perpetuate themselves and their cronies in office.

Let's be clear with one last thought -- this controversy is not about the fire fighters and EMS techs, they do a fine job and we all support their work to ensure our safety -- this is strictly about the government and the 'elected' board that runs the Arvada Fire Protection District.

The odds are against defeating this question to eliminate term limits -- the governmental power of the AFPD has stacked the deck for themselves. Nevertheless, I encourage district voters to apply for a mail-in ballot or mark your calendars to vote on Tuesday, May 7 and to cast a ballot marked 'NO'!

On Monday, April 1, I sent this email to the Arvada Fire Protection District; I've been told that I will receive answers in a week. When I get them, I will post them on this website.

I have some questions in regards to the upcoming special election.

How long has each board member served on the board of directors?

When were they first elected?
How many times have they subsequently been elected?

Could you provide a list of or link to the board members who have served over the past 25 or 30 years?

Are any of the board members former or current members of the Arvada Professional Fire Fighters Association or any other fire fighters union/association?

Thank you for your consideration.

The information below is provided per your request of April 2, 2013.

How long has each board member served on the board of directors?
When were they first elected?
How many times have they subsequently been elected? 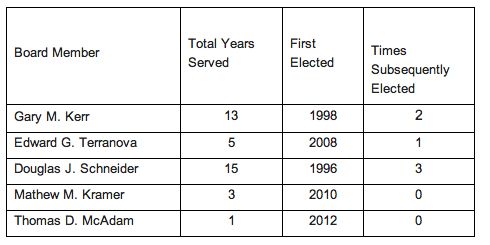 Could you provide a list of or link to the board members who have served over the past 25 or 30 years?
There is no existing link or list. The information would be available under the Colorado Open Records Act, but would require some time to assemble from archived records.

[I suggest here taking a look at the 'Meet the Board' page at the AFPD web site.]

Who will be conducting this election?
Jennifer Enochs, Designated Election Official
[Editors note: Enochs is an employee of the fire district.]

Specifically, who will be counting the votes?
Votes will be counted by duly sworn election judges according to the requirements of the Colorado Revised Statutes and Election Rules established by the Colorado Secretary of State.