Decades of the same old faces in Arvada municipal office: Williams, Frie, Dyer, Allard, Cook, Anderson -- now an attempt at repeat by Ted Terranova who is running for city council in District 3 on the November 2013 ballot.

What is it about Arvada city politics and government that lends itself to a culture of cronyism? What is it that keeps a very small cadre of 'insiders' in office for decades?

Well, the foremost explanation is undoubtedly that there is a lot of taxpayers' money to spread around to the rich and powerful -- from the seemingly generous hand of local officials. The recent development controversies about Walmart in the Arvada Plaza and the heavy-hand of Arvada Urban Renewal Authority in Olde Town have clearly demonstrated this corrupting political practice.

Having millions of taxpayer dollars with which to 'make deals' means that the 'governing class' (Arvada's elected officials, appointed officials like the executive directors of AURA and AEDA, and the upper crust of city staff) get to rub shoulders and schmooze with corporate vice presidents, top state and federal administrators, and other sundry 'power brokers'.

It has got to be heady stuff for this inside clique in the oft-forgotten, bedroom community suburb of Arvada.

So, preserving this 'business as usual' cronyism is important to its beneficiaries, they cling to it year after year, election after election with dogged determination. The insidiousness of cronyism means that government favors are returned with generous campaign contributions ... incumbents and their minions have all the money they need to outspend challengers by tremendous margins, hence entrenched and chronic cronyism.

Thus as one council crony, Shelley Cook, decides to move on to perhaps more affluent endeavors, another one re-emerges to try for yet another term on the ruling dais.

Twenty years ago Ted Terranova left the Arvada council under a cloud, now two decades later later -- after doing time on the Arvada Fire District board, on the city Board of Adjustment, being President of the Arvada Chamber of Commerce, etc. to prove his bona fides as a faithful booster for the 'insiders' club -- Ted wants back on city council.

Now, when I ran for city council myself in 1995, Mr. Terranova actually endorsed me, so in the past I've tended to be somewhat favorably disposed towards him. That viewpoint changed dramatically three years ago while Ted was an elected member of the Arvada Fire Protection District (AFPD) board and I dared to challenge the district's ballot request for one of the biggest tax increases in Arvada history. I thought the district was simply asking for too much, especially just two years after the Crash of 2008 and while so many Arvadans were still struggling through the Great Recession.

My opinion about the Arvada Fire Protection District's tax hike and its method of election were published on my web site and as an editorial in YourHub (Denver Post) for Arvada, Wheat Ridge and Westminster.

You would have thought that I had come out against the theory of gravity from the tenor of Ted Terranova's response. His peevish and querulous remarks tell us much about his temperament.

Here are the links and comments -- they speak for themselves:

At the time, Terranova even went so far as to attacked me by name in Arvada Press ads he paid for advocating for a 'yes' vote.

Frankly, I didn't think my opinion so important as to warrant such a reaction even from Terranova ... but apparently the governing class in Arvada does not care much for dissent, especially when it comes to extracting more money out of the taxpayers.

Then just two years ago when I engaged in a quixotic campaign for mayor of Arvada because I simply do not believe that in a democratic republic anyone should go unchallenged for such a significant office, Mr. Terranova as a chief supporter of Marc Williams, displayed the kind of reckless judgement that surely is not a quality wanted in a responsible member of the city council.

Do the rules apply to everyone? Including Ted Terranova? Here is the link to the post and comments on my web site that tell the tale:

Something Rotten in the Arvada Mayor's Contest

Ted Terranova's odd moments of irascibility show that he is not "the right person" for the council.

However, the bigger problem is actually that this is most certainly not "the right time" for yet another political crony to be seated on our city's governing panel.

Indeed, the last thing we need for these times is what Terranova's own web site describes: "His vast political experience along with his personal relationship with the majority of the remaining Council members ..." [emphasis added].

You see it is exactly that kind of cronyism that has led to millions and millions of public dollars being funneled to big private businesses and developers as a form of 'corporate welfare' by the city government and Arvada Urban Renewal over the past few years. It is that kind of exclusivity in the circles of the elected politicians that belittles and expresses disdain for average citizens by figuratively patting us on the head and saying "There, there, we know what's best for you."

I encourage voters in District 3 of Arvada to look at the big picture and consider that we need a reinvigoration of our municipal government and that perhaps it is the right time to end this era of cronyism and council members that spend decades clinging to office.

This is most assuredly ... No Time for Ted! 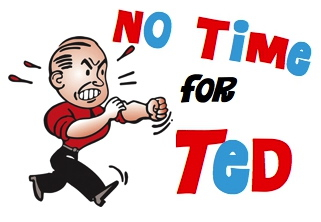 There is a reason that thoughtful and concerned Americans feel increasingly frustrated by how unfunctioning our representative democracy seems to be these days.

A lot of that has to do, of course, with the massive transfer of wealth from working and middle class folks to the upper five percent. That wealth is used to effectively 'buy' elected and appointed officials --- our very own Arvada city council and Arvada Urban Renewal Authority are prime local examples.

However, there is another reason why our once vaunted republic has descended into paralysis and dysfunction: there are just plain too many of us. Not only does overpopulation dilute the potency of representation, but the ever increasing demand on infrastructure and resources means that it becomes near impossible for business, government and social organizations to provide adequately for our perceived needs.

This past Saturday, September 7, 2013, Dr. Albert Bartlett, professor emeritus at the University of Colorado, died at 90 years of age.

Dr. Bartlett understood what overpopulation meant for human beings. He presented a lecture explaining the 'exponential factor' in terms that any reasonably intelligent person can understand. Here is a video of this presentation, called by many 'The Most Important Video You Will Ever See'.

Towards the end of his address, Dr. Bartlett mentions the 'Bathroom Metaphor' of Isaac Asimov. Here is a video of Asimov interviewed by Bill Moyers in 1988 explaining what overpopulation means to human dignity and the functioning of democracy.

Global climate change, overpopulation, Peak Oil ... real and serious challenges that we are facing as human beings. Dr. Bartlett and Dr. Asimov used science, arithmetic, reason and common sense to warning us that we must forthrightly deal with these looming problems.

Those with particular religious and/or political agendas can deny the truth of these phenomena all they want, but the facts and science won't change. We can honor the legacy of Dr. Bartlett by redoubling our efforts to do what is necessary to mitigate the worst impacts of overpopulation and how that causes global warming and the energy crisis we still face.