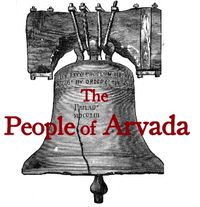 Here are the simple facts of the matter:

In the morning hours of Friday, January 10, 2014, Arvada Mayor Marc Williams presided over a final round of secret ballots that selected Jerry Marks for the district one council vacancy by a 5-to-1 vote. This is the council vacancy that occurred as the result of Rachael Zenzinger's resignation to take the open state senate seat that arose from Evie Hudak's resignation -- Zenzinger had just been reelected to a second four-year term on the city council in November 2013.

Five finalists had been chosen previously by the remaining six council members from a total of sixteen applicants for the position at another Friday morning meeting held on January 3, 2014.

This procedure had consequential and substantive effects -- some applicants were eliminated, others advanced by these secret ballots.

Then Mayor Williams sought to make the results of the secret ballots 'official' with an 'official' resolution appointing Jerry Marks to the district one seat -- that passed 6-to-0.

This procedure is a violation of the Colorado Open Meetings law -- that seems clear from my reading of the statute. Colorado Revised Statutes 24-6-402 prohibits the casting of secret ballots:

(IV ) Neither a state nor a local public body may adopt any proposed policy, position, resolution, rule, or regulation or take formal action by secret ballot unless otherwise authorized in accordance with the provisions of this subparagraph (IV).

Part of the law allows a secret ballot to elect "leadership" of a "state or local public body" -- that means, for instance, the council selecting from amongst its members the mayor pro tempore, or in the case of the Jeffco school board the 'election' of who will be the chairperson from among the five members. It certainly does not mean that a replacement representative of the people can be done secretly.

But that is exactly what happened in this case. The law states: For purposes of this subparagraph (IV), "secret ballot" means a vote cast in such a way that the identity of the person voting or the position taken in such vote is withheld from the public.

Thus on Friday morning, January 10, 2014, my council representative was chosen by people who do not even live in my district and they did this choosing secretly. What could be more antithetical to the very principles of representative democracy in our republican form of government?

So, good Arvada citizen and colleague of mine Russell Weisfield, who is also a district one resident, has step forward in a courageous move and challenged this city council action by filing a lawsuit to reverse the results of the secret balloting. (By the way neither Russell nor I had applied for this council vacancy position.)

Russell and I were proactive on this matter from the beginning; before Mr. Marks was sworn-in, we sent a letter to the mayor and council asking that this process be stopped because of Open Meetings laws problems. See: Men Rule Arvada City Council: The Cronyism Continues - Jaunary 13, 2014.

The importance of this issue cannot be overstated. The selection to fill a vacancy on the elected city council -- in other words a replacement for the peoples's democratically elected choice -- must not be done with the slightest hint of secrecy. As citizens of this city and residents of this district, we have a right to know why our representative was selected, why she or he was better than or more qualified than any of the other applicants. Acting in our stead as voters, we have a right to know why council members who do not even live in our district picked one candidate over another.

How are we to hold our elected government accountable if we are kept from even knowing why they make critical and important decisions that affect our lives in this city?

This lawsuit is about the bedrock principle of the republic -- we, the people, are sovereign. When there is a vacancy in an elected office, we, the people, must know and must see how and why a temporary successor is appointed to act on our behalf; otherwise we have government by an elite that is not answerable to us.

It is regrettable that a lawsuit is necessary; it is too bad that we have an arrogant and indifferent city council in Arvada that often belittles and mocks citizens who try in good faith to be involved in this community, but who might just happen to have a different point of view.

However, at least the court offers us a way to hold elected and appointed government accountable. You can be a part of this civic effort by contributing to the costs of waging this legal action: Stop Government Secrecy

Please forward this page to Arvada friends and neighbors ... and to anyone you know who is interested in open, honest local government:


You can look at the official legal complaint here:

Here is a video clip of the secret ballot portion
of the Friday, January 10, 2014 Arvada city council meeting.


“If the allegations of the complaint turn out to be true, there’s no question that the Arvada City Council violated the prohibition on secret ballots. It’s a slam dunk of a case,” said Chris Beall, the attorney who represented businessman Ronald Henderson in the lawsuit against the Fort Morgan council. “The fact that the council engaged in these shenanigans apparently without anyone raising their hand to object at the time is troubling.”

Part of Cronyism IS Lack of Diversity

In filling the Arvada city council district one vacancy, the "good ol'boys" used secret balloting to eliminate qualified applicants and conducted a 'forum' that clearly showed that the intent was to select someone who would agree with the incumbents -- not who might best represent the residents of the district.

This is a city council not worthy of all the people of Arvada. 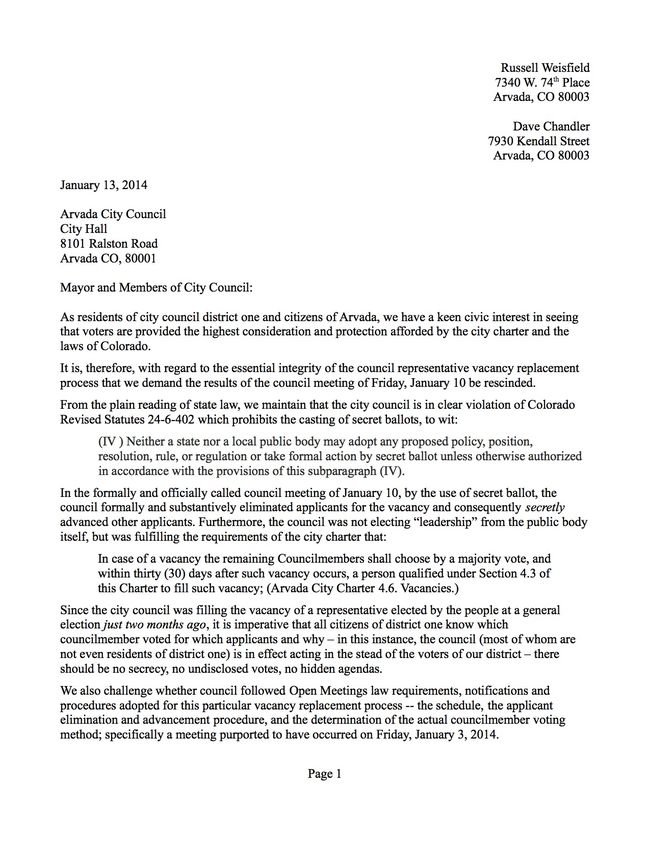 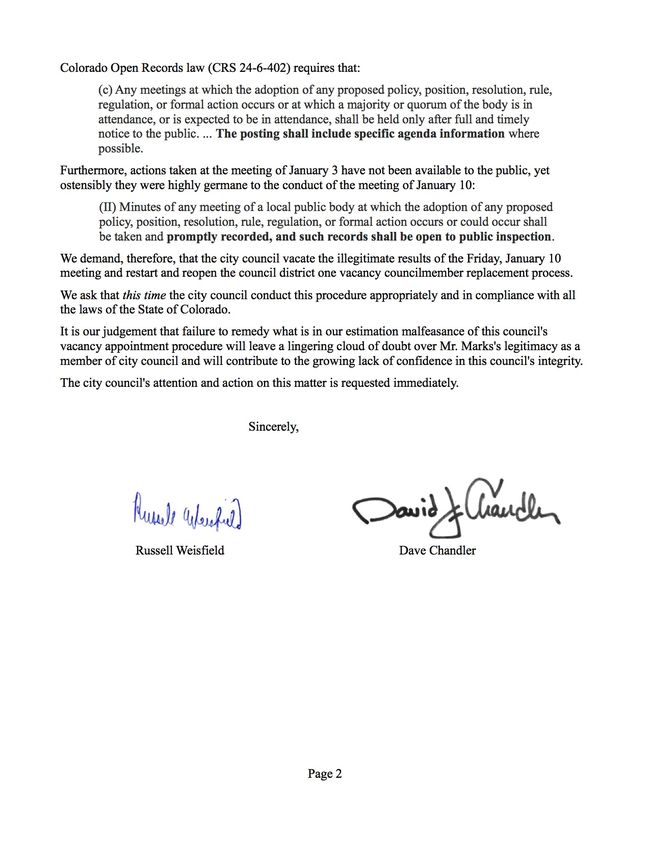 "20 years later and there's no tollway out there."

One - This tollway idea is for the express purpose of spurring more suburban sprawl to the west of Arvada proper, the Candelas development.

Two - The establishment elites in Arvada and Jefferson County government are far more interested in pleasing business and residential developers (more tax revenue and campaign contributions) than they are in the real safety issues associated with plutonium in the area from the former Rocky Flats nuclear weapons manufacturing factory.

Three - It is simple common sense: a tollway will drive toll-avoiding traffic onto already crowded arterials Wadsworth and Sheridan. Far from alleviating traffic flowing through Arvada, the tollway will exacerbate the problem (if it is a problem).

Remember, this tollway segment will not complete the metro Denver beltway -- it does not connect up with either the Northwest Parkway or C-470.

... Dave Chandler, an Arvada resident who has fought against the Jefferson Parkway and its predecessor projects for decades, said he's not worried about work on the parkway starting anytime soon. He said it's still not clear to him how the highway builders are going to pay for the road and, more importantly, he doesn't see a need for it.

"Here we are 20 years later and there's no tollway out there," Chandler said. "Because ultimately there just isn't any demand."

Posted at 11:44 AM in About Arvada, Issues - Transportation, Jefferson County | Permalink | Comments (0)

Colorado, We Need a Tax Cut

Frankly too many of the state's residents are losing ground by being nickeled-and-dimed by fees and taxes -- special district taxes, municipal taxes, government fees, school fees, tuition increases, etc.

This circumstances helps explain why the issue of income inequality is rising in the public consciousness.

So, here is a proposal for the majority Democrats in the Colorado legislature to consider and refer to the November 2014 election ballot.

Reduce the state sales tax rate and make up the revenue lost with the creation of a new state personal income tax bracket for higher level earners.

The wealthiest residents of this state can surely afford to pay more to support the cultural and business environment here that has profited them so richly.

Sales taxes are regressive; they hurt most those who can afford it least. We could use some tax justice in Colorado and some relief for those most negatively impacted by the lingering effects of the Great Recession.

By the same token, making sure that the average Colorado family has a bit more discretionary spending money will undoubtedly also help businesses across the state.

Moderate, common sense Republicans (if there are any left in the state legislature), the majority Democrats and Governor Hickenlooper ought to pick-up this economic challenge; this issue is at least worthy of debate and discussion in 2014.

Democrats especially ought to find a way to practice what they preach and support a plan to economically empower the working, middle class folks they claim to represent.

While we are at it, perhaps a reset on Colorado's minimum wage, too. The latest inflation adjustment brought the wage all the way up to a whole $8 an hour. Surely we can do better than setting the minimum earnings for full-time workers at close to the poverty line.

Anyway ... a debate on bread-and-butter issues that affect the real lives of everyday Colorado citizens is much to be preferred to an election season now looking to be hijacked by the gun radicals.