NOT "Transparent and Objective"

A version of this article was published in the print edition of YourHub/Denver Post for Arvada, Wheat Ridge, Westminster on Thursday, February 20, 2014.

Here is the audio link to the legislative mark-up for the Open Meetings law that forbid secret ballots when filling and elective vacancy. The relevant portion begins about about 38 minutes and last for around ten minutes or so:

The legislative intent seems very clear in meaning to prohibit precisely what the Arvada city council did when it used rounds of secret ballots to fill the council district one vacancy.


This is how the Arvada city government praised itself in its propaganda newsletter, The Arvada Report, for the district one vacancy appointment process:

Congratulations to Jerry Marks and to the City Council for conducting a fair, transparent and objective process in a highly collaborative manner. [Emphasis added]

However, the process was anything but transparent and objective.

A newly revealed email from Mayor Marc Williams now underscores the reasons for the growing controversy.

First of all the council conducted its final selection process with secret ballots in what looks to be a violation of Colorado law on Open Meetings. This most un-transparent action was noted in a letter sent by Russell Weisfield and me to the council before the chosen replacement, Mr. Marks, was sworn-in: Men Rule Arvada City Council: The Cronyism Continues - January 13, 2014. Failure of the city council to correct its procedure has now resulted in an Open Meetings lawsuit being filed against the city council with Russell Weisfield as plaintiff.

Then it took 20 days for the city government to finally make public the audio of the special city council meeting held in the morning hours of Friday, January 3, when the vacancy selection process was discussed.
[Link: http://static.arvada.org/media/140103_council.mp3]

This audio reveals a clubby clutch of six older men making plans ... there is just no other way to describe the meeting. The verbal interactions among the six guys has a disconcerting quality to it: they are chummy, familiar, occasionally glib, somewhat supercilious and comfortable in the years and years and years most of them have been incumbents. One could easily imagine this truly being a meeting of an entrenched small town council back in 1954.

Yet considering the gravity of the meeting’s topic, there seemed to be only cursory concern for the concept that these men were acting in the stead of the voters of district one.

Now, through a Colorado Open Records Act request, we have an email sent on January 2, by Mayor Marc Williams to his fellow council members, select city staff and ... his wife.

The email shows that in effect, yet another 'secret balloting' occurred as city council members anonymously ranked the original 16 applicants -- apparently without using any prescribed criteria. We read Williams's email stating:

I would propose we begin with a discussion of what qualities we are looking for to fill the vacancy, and open it up to further discussion of personal preferences from each of us in deciding the final candidate pool, and the size of the pool.

"Qualities” not ‘qualifications’ he writes; “personal preferences” he writes.

This is NOT "transparent and objective".

The importance of having a council vacancy appointment process that is lawful, open and objective cannot be overemphasized. All Arvadans, but especially district one residents, have a right to know how and why council members -- who are not even inhabitants of our district -- are choosing our representative on the council. This is a fundamental issue of honest democracy in our republican form of government.

Of course, the email raises a host of other questions and concerns about the district one vacancy appointment process ... not the least of which is ... why is Mr. Williams sending a bcc copy of this email to his spouse? 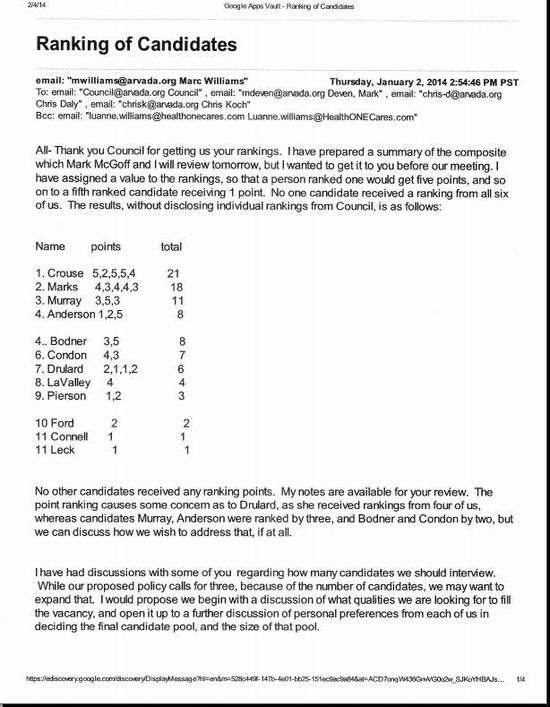