Arvada Council's Creed: "We always know what's best for you."

Arvada's dysfunctional democracy was on full display this evening, Monday, March 17, 2014: while a majority of Arvadans voted for Amendment 64 (legalization of possession of and retail sales of marijuana), not one single elected or appointed city council member could find it within themselves to represent the majority of voters. Not one. Seven-to-zero was the vote of our 'un'representative so-called representatives to make the moratorium on retail marijuana sales permanent.

The 'mayor' actually chose to reference my YourHub article of last week (below) on this matter in his closing remarks -- he was typically arrogant and elitist, smug and two-faced on this issue as he is on so many important matters that confront Arvada.

But it is the anti-free enterprise agenda and the embracing of this dysfunction of democracy that is most disturbing to see in these old white men who purport to support our American free market economic system and the ideals of the republic. Sadly, the city council lived up to the theme of my article, "we always know what's best for you."

The Arvada city council is about to engage in yet more anti-free enterprise activity -- especially apropos for the 21st century. On the March 17 agenda is an ordinance to renew the city's cable franchise agreement with Comcast. In an era of satellite, wireless, fiber optic (Google Fiber; U-verse) -- internet and television delivery can be highly competitive -- an exclusive franchise for a mega-corporation like Comcast is an antiquated policy.

Besides, Comcast has become a terrible corporation, operating very much against the best interests of its own customers and the principles of competition in the market place:

Why Comcast's Price Discrimination Strategy Makes Me Hate Them | Forbes

On St. Patrick's Day, Monday, March 17, 2014, the Arvada city council is set to decide again whether or not the free market operates in this city.

This city government is big on centralized economic planning and market manipulation, so the odds favor a "we always know what is best for you" outcome at this meeting.

On that day the council will likely vote to permanently ban legal sales of marijuana at businesses that could be licensed to do such in Arvada. Up till now the Arvada city council has imposed a moratorium on these businesses that were approved to be legal by Colorado and Arvada voters through Amendment 64 in the 2012 general election.

Don't be distracted by feigned concerns for public safety and protecting our youth -- this is about the Arvada political machine's drive for control.

The seven* middle aged and older men on the Arvada council (and their development slush fund, the Arvada Urban Renewal Authority), have visions for this town of a well ordered, homogeneous community of quaint boutiques, cafés, grey flanneled train commuters, weekend coffee-sippers and unquestioning boosters of the Chamber of Commerce.

There is no place for pawn shops, or car dealers or, my gosh, recreational marijuana retailers in the 'suburban paradise" of the Arvada council politburo. Working and middle class is great for collecting taxes ... but for the city's new Goldline image? Really!

The seven* would protest, of course, that they are proponents of free enterprise -- but what they say and how they vote on the council are two very different things.

Because though they may argue, as they did during the Walmart debate, that they cannot chose what businesses are acceptable and that they have to follow their previously determined 'plans' or get sued (and they get sued anyway) -- picking business winners-and-losers is exactly what they do!

Thus while they consider approving yet another liquor store for Arvada at Carr Street and 62nd Avenue, we can anticipate at the same time -- with a somber visage -- the seven* will do a head shaking "tsk-tsk" over letting Arvada residents make market choices for themselves when it comes to marijuana.

Let's be clear, the American free enterprise approach is to let legal businesses set-up shop and consumers will decide with their dollars whether or not there is a market for recreational marijuana product in Arvada. No taxpayer subsidies, no tax preferences, no corporate welfare as in the case of the Arvada Triangle Walmart deal, just plain ol' competition in the market place.

The Arvada council has already voted twice for a moratorium prohibiting retail sales of marijuana in our city; the next vote is meant to decide the issue permanently.

The sentiments of the city commissars seems pretty clear -- unless you let them know that we demand democracy and genuine free enterprise in Arvada.

* The Arvada district 1 city council member was arguably seated inappropriately and that process is the subject of an important citizen-initiated lawsuit. See: Arvada Council's Secret Ballots are Challenged 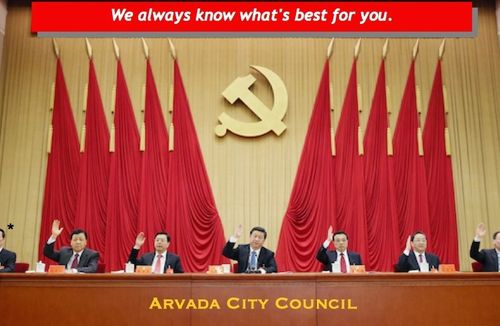