On the Ludlow Massacre Centenary 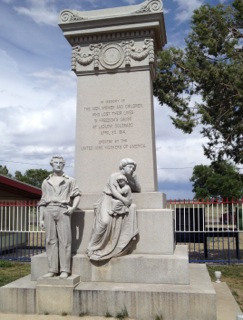 The centenary of the Ludlow Massacre occurred on April 20 of this year.

A monument stands at the site of the event just north of Trinidad, Colorado.

It is my contention that broad-based economic prosperity for all Americans will never happen again until labor is honored and accorded the same rights and privileges as capital.

If individuals can combined their wealth to organize business for shared profit, then individual workers must have the same right to combine their labor to organize for their mutual profit. This recognition of economic and political equity is a simple matter of balance that means all participants in the marketplace have equal advantage — one side cannot succeed without the other.

Organized labor is just as necessary to prosperity as is organized capital, perhaps even more essential since the workforce consists of millions of people seeking “life, liberty and the pursuit of happiness” … production and consumption by ordinary people is the engine of our economy.

The increasing imbalance in the U.S. economy that has occurred since the 1980s, especially the stagnation and/or decline of real earnings for regular Americans — while the wealthy elite have seen unprecedented increase, is an inequality millstone dragging down any prospects for future, sustainable growth.

Two dozen people, including women and children were killed at Ludlow on April 20, 1914; they died during the struggle for basic rights and self-respect. The right to organize one’s efforts with others is fundamental to human dignity — we need to reemphasize that value once again for the benefit of us all.

More democracy!
Better representation
for all of Jefferson County's residents!
Saturday, June 14, 2014
10:00 A.M. to 2:00 P.M.
Sign the Petition to allow the voters to decide if Jefferson County
should move to a Board of 5 Commissioners.

Alert your friends, family and neighbors of a petition signing opportunity
in front of the following Jeffco Libraries:
Belmar, Columbine, Evergreen, Golden, Lakewood and Standley Lake

Please join us that day to check out a petition to circulate or to sign the petition.
We need 25,000 signatures by June 30 to place this on the ballot in November!
LET THE VOTERS DECIDE!