Arvada Government Sure Does Pay! 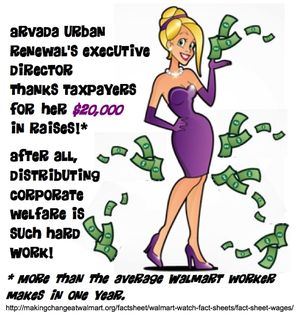 UPDATE!
The $5000 annual raise for Ms. Phair was approved unanimously by the Arvada city council -- without discussion -- at its meeting of Monday, September 15, 2014.

UPDATE!
We are now in possession of all three employment documents for Ms. Phair. A correction has turned up in the Third Amendment: the retroactive date is to July 2014 ... not 2012. This kind of incompetent error is what happens when a document is not presented to the public at the time it is approved by the AURA Board of Commissioners. (This 'mistake' is also revealing in light of Phair's other official job title as 'Secretary' ... perhaps some remedial office skill classes are in order, that the taxpayer's would have to pay for, of course.)

Wow! $20,000 in raises in just three years. I wonder how many other city employees are so well considered? How about the average Arvada taxpayer?

Without comment or explanation, the Arvada Urban Renewal Authority (AURA) Board of Commissioners passed a third amendment to the employment contract of executive director, Maureen Phair, at their regular meeting of Tuesday, September 2, 2014.

Just last summer, Phair's salary was set at $125,000, a $500 a month car allowance, plus other benefits. If the city council approves this generous pay raise, Phair will get a nice fat check for at least $10,000 right off the bat.

Life sure is hard for some top government bureaucrats, uh?

Considering that a great deal of Phair's job is to arrange give-aways of tax dollars to development companies and retail corporations, well, your average Arvadan might be forgiven if they just don't quite comprehend the necessity of this kind of personal government largesse.

Hey, when was the last time you got a retroactive pay raise? A pay raise?

But it does seem that government-types do tend to take care of their own if they are at high enough levels (after all, it's not their money and they always know what's best for you).

Just as troubling as the lavishness of the pay hike is the secretive nature of this proceeding -- no public discussion or explanation before the vote by the AURA board for this contract amendment. [See AURA meeting citizen notes.] If a copy of the document hadn't been specifically asked for, we still wouldn't know what this all about. We are led to conclude, therefore, that in previous secret meetings (also called 'executive sessions'), the AURA board and the executive director 'negotiated' this 'personnel matter'.

Sometimes, as this episode so far demonstrates, public cynicism and distrust of government bureaucrats and politicans is certainly well deserved.

Of course, I still wonder why there isn't a sunset provision for the executive director's car allowance, after all, after the Gold Line is up and running, Denver resident Phair will be able to take the train to work, right? 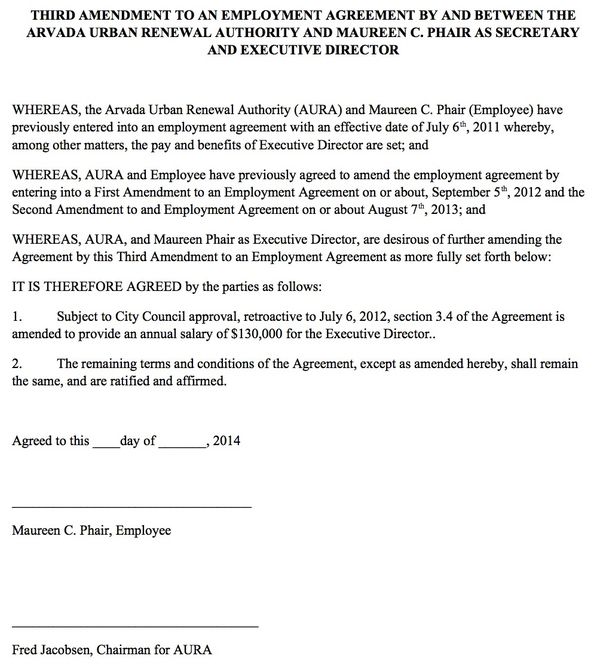