Urban Renewal: Everything That Can Be Wrong With Local Government 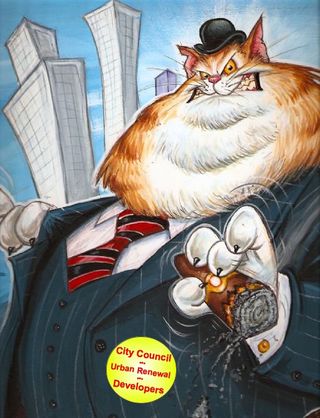 Arvada’s mayor and Urban Renewal board member, Marc Williams, makes a verbose attempt today in YourHub ‘Letters to the Editor’ to counter my points about the Arvada Urban Re

newal Authority(AURA) and good government in an article that was published on the web and in YourHub last week (below).

His observations fail on all three points.

First, he tries to make a connection between government use of eminent domain and the Arvada Plaza redevelopment. I, on the other hand, did not. However, it serves his rhetorical purpose to make that link. The documentation I provided at the YourHub web site refers specifically to AURA’s and the city council’s pursuit of eminent domain to build “another” Walmart at 52nd and Wadsworth. In fact, so intent was Arvada Urban Renewal that they took the case all the way the Colorado Supreme Court — and, thankfully, lost. (Williams was on the city council even back then.)

Second, Williams writes about Safeway being driven out of the Arvada Triangle area: "Nothing could be further from the truth." Yet from a CORA freedom of information request in July 2013, there is this citation from an AURA document (the document is reproduced at the link):

Met with Safeway. Upset about the Wal-Mart, said would push them out of business at this location. Unhappy with AURA and IRG - claimed they wanted to move their store to Arvada Plaza
• Howard Gerelick, Vice President, Real Estate Denver & Phoenix Division
• Arvada Personnel - Mark [Deven], Marc [Williams], Hazel [Hartbarger], Katy [Press] (I did not attend this meeting [Maureen Phair])

Third, Williams does not counter my argument about letting free enterprise takes it course, he merely disagrees. Well, we all know that — that is not the point. The point is that government policy does distort and manipulate the free market when it provides bailouts for private land owners or gives subsidies to preferred developers -- that is just common sense. This very policy that Williams enthusiastically supports has given away (or is about to) tens of millions of dollars through AURA in just the past couple of years:

Finally, the number of “executive sessions” (secret meetings) that AURA board and the city council hold can only lead to suspicions about the nature of so many of these generous deals — sunshine on government is the best policy — do the public’s business in the open. Furthermore, this is the 21st century, we all know how the game is played in politics with campaign contributions from those who expect or get deals from elected officials … don’t we?

An edited for space version of this article was published in YourHub/Denver Post on Thursday, January 22, 2015.

Cronyism, corruption, corporate welfare, corporate socialism, elitism, insider deals, political payoffs, central planning, social engineering ... the worst of what can happen when politicians, government bureaucrats and business fat cats get together under the auspices of your local  'urban renewal authority'.

In recent years we have seen the Arvada Urban Renewal Authority (AURA) go on a tax give-away binge and engage in heavy-handed regulation for the benefit of favored developers; behavior that has gone far beyond what the 'urban renewal' concept was ever meant to accomplish.

Perhaps most egregious is the strong-arm power of urban renewal authority that distorts and manipulates the functioning of the free market. Local established businesses and historic neighborhoods are thus artificially impacted in ways from which they may never recover. In just the past couple of years in Arvada we have witnessed the city council and AURA applying elitist "we always know what is best for you" decisions in the central region of the city especially.

The whole urban renewal process often descends into what amounts to sanctioned bribery and graft when developers get rebated millions and millions of tax dollars to build projects desired by government -- where otherwise the free market would render its own organic resolution and judgement. Any such system is ripe for abuse: thus, not unexpectedly, we have seen in city council elections, proponents of city government largess tending to receive campaign contributions from their developer 'friends'.

Once upon a time, government urban renewal was meant to reconstruct rundown or 'blighted' urban areas. These days it means

The Arvada Urban Renewal Authority has become a scandal ... but, the concerns of city residents are belittled and ignored.

What are the typical responses of the elected elite, the establishment politicians and their cronies to this tax give-aways and favoritism towards wealthy developers?

Lately, however, citizens across the metro area are waking up to this abuse of government power that favors special interests over free markets and taxpaying residents.

Residents of Arvada, Westminster, Littleton -- indeed, the entire Denver region -- all want good quality economic prosperity for our communities. Undoubtedly, however, most regular folks also believe that free enterprise, fairness and the 'old fashioned' American way of doing business should not be subverted by government favors and preferences for a chosen few picked to be 'winners' by urban renewal authorities.

To find out more about the Littleton urban renewal ballot issue, go to: http://yourlittletonyourvote.wordpress.com

Consequently, it is imperative that solid citizens dedicate themselves anew to vigorous curiousity, critical thinking, creativeness and serious contemplation.

Nearly sixty-five years ago, ten guiding principles for meaningful civic engagement were offered to us by one of the 20th century's great minds.

Published in December 1951, Nobel Prize recepient Bertrand Russell, authored these 'Ten Commandments' to provide guidence and wisdom in pursuing our daily lives and as advice for particpating forthrightly in our community. Particularly in a representative democracy it is incumbent upon us as good citizens to challenge complacency, comfortablity and convention.

Bertrand Russell’s Ten Commandments for Living in a Healthy Democracy