« Urban Renewal: Everything That Can Be Wrong With Local Government | Main | Urban Renewal's Bad Deal for Arvada » 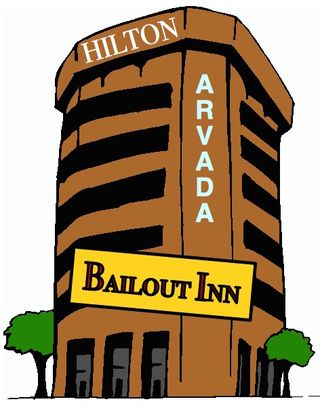 UPDATE!
Arvada mayor, Marc Williams offers a retort of the 'Hilton Handout' article in the Arvada Press for Thursday, March 5, 2015: "A positive AURA".

In neither of the articles I wrote that have been published about Arvada Urban Renewal did I mention or identify any individual — I have raised issues about serious governmental, economic and political policies. Yet, in both of his rebuttals, Marc Wiiliams personalizes his response by addressing only me — an attempt to marginalize the legitimate concerns and questions that (I suspect) many, many Arvadans have about these AURA deals.

Frankly, his reply relies on mostly lawyerly rhetorical devices: he belittles dissenters; he avoids the primary argument; he misstates my points; he misrepresents facts; he uses ’new’ information; he offers no citations; etc.

Of course, the most glaring argument avoidance is his complete failure to address the main point of contention … as I wrote in the article: “ Selling the property for only $500,000 to a private, for-profit development corporation when “the price paid by AURA of $3,287,000” is most troubling.” Troubling enough that apparently he doesn’t want to even talk about this blatant example of corporate welfare. You know, “Pay no attention to that man behind the curtain.”

For brevity, just one other example from his retort that also highlights Williams’s apparent disregard and/or lack of understanding of free market principles. He writes, “The market place is absolutely deciding the location.” Yet this contradicts the public information from AURA itself, of which Williams is a board member. From the AURA board meeting information packet: "Since 2003, AURA has been working to realize the City of Arvada’s priority to bring a hotel to Olde Town. In 2008, AURA created the Village Commons Urban Renewal Area with the sole purpose of developing a hotel on the site.” Really, does Williams have such disdain for us that he thinks that we will not see through his feeble effort to distract us?

Finally, there is this looming issue — conflict of interest. As mayor, Williams appoints the members of the AURA board, indeed, he has appointed himself a member; he has clearly been deeply involved in luring the Hilton hotel developers into this urban renewal project. When (or if) this particular plan comes for Preliminary Development Plan consideration before the city council, he is supposed to act in a “quasi judicial” manner, that is, as an impartial decision-maker. It defies the common sense of any Arvada citizen that he could ethically perform this function. Yet his past practice indicates that this is what he will do: he refused to recuse himself from the council vote on Walmart — even though that was another AURA sales job in which he had been actively involved.

There is increasingly no doubt that we need real change in Arvada — we ought to have elected representation that is as good and as honorable as its residents.

UPDATE!
An edited version of this article was published in YourHub/Denver Post for Arvada, Wheat Ridge, Westminster on Thursday, February 26, 2015.

UPDATE!
News article on this subject published in the Saturday, February 21, 2015, edition of the Denver Post.

What is revealing in the article is how the city bureaucrat seems to think that it is the government's duty to bring us a for-profit, corporate hotel.

America is about entrepreneurship and free enterprise -- so should be Arvada!

Now it is a Hilton Handout!

Arvada government has a scheme to give-away over $2,700,000 to a private, for-profit hotel developer.

The Arvada Urban Renewal Authority (AURA) and city government is again planning the most outrageous kind of corporate socialism that manipulates and distorts the free market.

This time for a Hilton Garden Inn to be erected just across from the scenic west wall of the Lowe's Home Improvement store on Olde Wadsworth. "We always know what is best for you" city officials have decided that this is where a hotel ought to be in Arvada. The market place isn't deciding the location; the hotel industry isn't deciding; free enterprise isn't deciding -- the government is deciding.

Selling the property for only $500,000 to private, for-profit development corporation when "the price paid by AURA of $3,287,000" is most troubling. There are also tax give-aways as part of this deal.

What is happening in Arvada government to American values of free enterprise, the free market, business competition, risk and entrepreneurship? Why are very prosperous corporations like Hilton and Walmart being offered millions of dollars of subsidies from City Hall?

"A market economy based on supply and demand with little or no government control. A completely free market is an idealized form of a market economy where buyers and sellers are allowed to transact freely (i.e. buy/sell/trade) based on a mutual agreement on price without state intervention in the form of taxes, subsidies or regulation." (Investopedia)

The Arvada Urban Renewal Authority itself admits that in effect, this is an unfeasible free market project -- it is over five and half million dollars short (emphasis added)(AHI is Arvada Hotel Investors, the developer):

"AURA staff analyzed the development proforma, including TIF projections and construction estimates and verified that there is a financial shortfall of approximately $5,562,000 in AHI’s development pro forma. To address the gap, AURA will 1.) discount the cost of the property to AHI from the price paid by AURA of $3,287,000 to $500,000 and 2.) rebate to the developer the 2% lodging tax for a period of ten years up to $800,000. The total value of the land discount and tax rebate is $3,587,000. The remaining financial shortfall in the development proforma of $1,975,000 will be AHI’s responsibility and serviced by the planned 6% PIF."

[Note: This means that even with the millions of dollars of government subsidies to the hotel developer, they are still estimated to be nearly $2 million short of what they need to make a go of this project -- the market place itself is announcing loud and clear that this site is not ready for a Hilton hotel.]

In simple terms: the Hilton developer cannot afford to build in Arvada without a $2.7 million property acquisition bailout ... government intrusion in the marketplace.

The government, of course, tries to paint "positive" impacts from this project. The alleged economic supplement to the city of $3,000,000 is surely optimistic. AURA seems to assume that all hotel guests will hike up the hill to Olde Town or take a taxi to Walmart to benefit the "local economy" with their discretionary cash.

It might be nice if there were a hotel in Arvada ... but it should come here because the business conditions and the free market warrant it, not because the government is artificially subsidizing its construction.

The municipal government of Arvada and its Urban Renewal Agency are blatantly subverting, distorting and manipulating free enterprise in its wolfish quest to engineer a new Olde Town. The Olde Town of urban renewal will bear little resemblance to the historic area that has characterized the family-friendly small town feel the most Arvada residents value.

Arvadan's are practical, common sense, fiscally prudent Americans -- this deal does not reflect the values and principles of the vast majority of our wonderful city's residents.

The details of the 'Hilton Handout' deal can be seen in following document:
Arvada Urban Renewal Authority Board Meeting - January_7,_2015 | Packet PDF

An edited version of the above article published in the
Arvada Press, Thursday, February 19, 2015 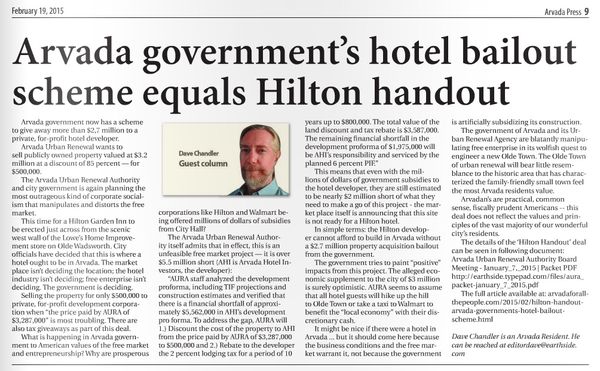