Crisis in the Oil Field: Yes, It is Peak Oil

The great irony for many residents and politicians of the oil patch is that we heard from many of them in 2012 that Pres. Obama was bad, bad, bad because of the high price of gasoline ... better vote for Romney; he'd get the price of gas down, right?

Now the cost of a gallon of gasoline in many parts of the nation is $2.00 or less and the price per barrel of oil stands at $40 or less. Predictably those same denizens of the oil patch now proclaim that Pres. Obama is bad, bad, bad ... it is somehow his fault that layoffs and bankruptcies are hitting the oil fields because the low price has taken all the profit out of production. The adage applies here: be careful what you wish for (but for the reactionary right no matter what happens, it is always Obama's fault).

The basic concept of Peak Oil that the end of the era of cheap, conventionally produced oil is upon us is an incontrovertible fact. Indeed, half of the petroleum produced in the United States today is through unconventional methods that demand a high price per barrel to make it worth extracting from the ground.

It is a flaw of capitalism that high price/high demand can lead to more production, but occasionally then oversupply and price collapse occurs causing economic dislocation, sometimes severe. And in the U.S. this is what has happened ... in large measure because junk bonds financed the tight oil 'fracking' drilling frenzy, to survive at all producers need to try and keep pumping even at a loss just to make interest payments, thus exacerbating the oversupply and low price problem.

Thus recession in the oil patch in the United States is primarily the fault of the petroleum producers themselves -- too greedy and too shortsighted. As usual, workers and their families suffer; owners, CEOs, bankers, bond dealers, and speculators just move on to other lucrative endeavors.

Whether or not we see a recovery in the price of oil remains to be seen, but circumstances tend to argue against that in the short or medium term. While actually Saudi Arabian production has remained relatively static over the last couple of years, Iran, Libya, and Iraq are putting more conventional (cheaper) product on the market. Furthermore, the anemic state of the U.S. economy (the still declining purchasing power of working and middle class Americans, i.e., the income inequality problem) likely means weak demand continues; indeed, we may be witnessing the beginnings of a deflationary spiral, in my  estimation. 'Fracked' oil therefore may not return to profitability for a long, long time ... and that will have very little to do with environmentalists or Pres. Obama.

To further understand the intricacies of the petroleum situation right now, I recommend a very good podcast discussion between Jim Kunstler and oilman, Art Berman. Listen! 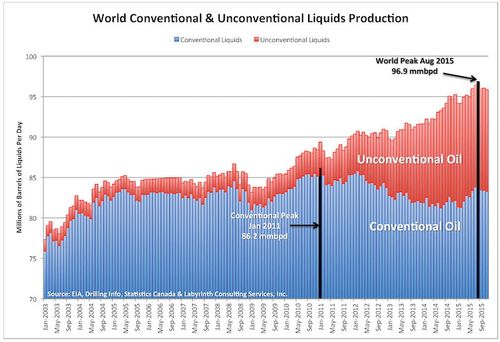