« Crisis in the Oil Field: Yes, It is Peak Oil | Main | A Thinking Person's Guide to Why Hillary Clinton is Not Fit to be President of the United States »

The Failure of FasTracks - The ‘University of Colorado A-Line’ 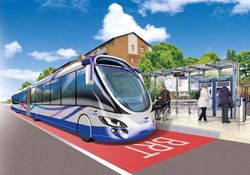 The most anti-environmental and taxpayer exploitive thing that has happened in the Denver region in the past twenty years is FasTracks.

Six high density, traffic congestion-inducing so-called ‘Transit Oriented Developments’ are noted in the article as a consequences of the opening of the ‘University of Colorado A-Line’ (yes, a public university bought the naming rights … an institution always angling for more money from the taxpayers uses its funds on that kind of frivolity).

Just as we see in Olde Town Arvada, all of these FasTrack train routes are geared towards increasing population and compacting more and more people into smaller and smaller spaces. Any alleged benefit of reducing automobile traffic congestion has long ago been obviated by the increase in the metro area’s population. Since train routes are fixed, their inherent inability to adapt to changing human behavior, i.e., where people want to go, means that cars and trucks are just as essential as ever for most folks.

Despite what train lovers may argue, FasTracks has always been really about politically connected developers, government power, the transfer of wealth from working people to bond dealers and bond speculators, and pathetically to a segment of elitists with an inferiority complex — about Denver’s standing as a “world class city”.

If instead of the tens and tens of billions of tax dollars spent on trains and interest payments, we had built a 21st century Bus Rapid Transit (BRT) system, we would have had a much more effective and affordable public transportation system already in place for the past a decade. BRT could have been routed and rerouted to where people actually live instead of “we know what is best for you” governments and urban renewal authorities manipulating the market place to force population into ‘Transit Oriented Developments’.

FasTrack is a failure — years and years behind schedule, billions of dollars over budget, totally irrelevant to mitigating traffic congestion and environmental concerns, and too expensive for most commuters.

But it is too late now … we will pay, pay, pay for this for decades to come.