For my Republican friends all I can say is that if Hillary Clinton is elected President of the United States this November you can pat yourselves on the back for a job well done … because you did it.

Good grief, you nominated Donald Trump, what did you think would happen?

For many years now the inevitability of a Trump-like Republican catastrophe has been recognizable to any attuned political observer. Since the 2000 Bush Restoration (the Iraq disaster and the precipitation of the Great Recession), and the birth of the demagogic Tea Party in 2008, Republicans have given up their raison d’être to hucksters like Rush Limbaugh, Mark Levin, Michael Savage, Glenn Beck, Fox News, Louis Gohmert, Allen West, Sarah Palin, et al. Thoughtful formulation of conservative governing policy and philosophy jettisoned to make way for media sensationalism, celebrity, obstructionism, scapegoating, and raw nativism … characteristics now fully embodied in the candidacy of Donald J. Trump.

Especially since the election of the current President, the Republican Party abandoned traditional conservatism and became little more than a mob of rabid anti-Obama reactionaries, with predictable consequences: a presidential nominee who is a windbag New York real estate huckster and TV show host. For the party of Lincoln, TR, and Ike that’s pretty pathetic.

Meanwhile, since the ascendency 25 years ago of Bill Clinton, the establishment Democratic Party has become a wholly-owned subsidiary of America’s plutocratic corporatocracy — the New Deal as a powerful legacy is long gone — Clintonism has triumphed. Indeed, Hillary Clinton, Bill Clinton, Chelsea Clinton, the Clinton Foundation, and their Democratic Party minions, despite Republican efforts to cast them as neo-Marxists, are, in fact, the epitome of the big business-corporate governing class — better Republicans in 2016 than most Republicans were even during the Reagan era. (By the way, the Clintonites are just as bad with the hyperbolic labelling, eg., ‘Trump is Hitler’ … the usual tendency of political tribalism that seems to always outshout vigorous, but rationale discourse.)

Clinton is a corrupt, cynical plutocrat and Trump is a reactionary, opportunistic buffoon. The two party system is broken and the evidence is that Trump and Clinton are their party’s presidential nominees. Big money, special interests, and decrepit party establishments have so compromised the Republicans and Democrats that they no longer represent even the rank-and-file of their own members, let alone the aspirations of most Americans. [Only 9% of America Chose Trump and Clinton as the Nominee, New York Times, August 1, 2016]

I laid out the case against Clinton in “A Thinking Person’s Guide To Why Hillary Clinton Is Not Fit To Be President Of The United States”. For me, having been a New Deal, pro-union Democrat in my youth, I feel a sense of betrayal in the Hillary Clinton candidacy, she represents so little of the principles I consistently advocated for in the past and so much of what I have been against. These days I am an eclectic political thinker with ‘conservative’ positions on some issues as well as ‘liberal’ ones — reason, facts, contemplation, and independence are qualities that I aim for — certainly not unquestioning party or ideological loyalty.

On display almost everyday is the case against Donald Trump — he is a boor and a wisenheimer. I simply can’t take him seriously; he demonstrates repeatedly that he does not have the knowledge or intellectual rigor to be President of the United States (I think he knows this himself, which explains his continuing careless, reckless, and inane rhetoric; it’s like he isn’t even trying very hard to be a serious contender for the presidency).

The Republicans have lost their minds and the Democrats have sold their soul.

Consequently, I will not vote for Hillary Clinton nor Donald Trump for President of the United States.

I will be voting my conscience and casting a ballot to strike in my own way against the decadent and destructive two party system. There are alternative candidates whose degree of success will send the message that we, the people, are demanding more honesty, integrity, and democracy in how our leaders and representatives are chosen. Consequently, this maybe the most valuable vote for President I have ever made — reform in our political and governing processes has to start now if the promise of this republic is to be renewed.

So, I’m not falling for the tired old argument that by casting a ballot for the Green or Libertarian candidate for President I am “wasting” my vote or am somehow actually picking Clinton or Trump. A vote in a representative democracy that is cast with good conscience and conviction is never “wasted” — for others to argue that is the height of arrogance and condescension towards you and me as equal citizens of this nation.

Your vote is your vote; it isn’t owned by anybody else or any political party.

I recommend “How Not To Waste Your Vote: A Mathematical Analysis"
Stephen Weese, Foundation for Economic Education, August 2, 2016

At the time of this writing I am considering a vote for Gary Johnson for President. I am not a Libertarian Party member and I have many disagreements with them especially on economic issues. However, I think that the Johnson-Weld ticket has governing experience that is lacking in the Green Party candidates for President and Vice President. I think that right now the Libertarian candidates are in a strategically better position to have an insurgent impact on the electoral process. In the event of a political miracle of cosmic proportions and Johnson is elected, the Congress, still dominated by stodgy old Republicans and Democrats, would stifle any Libertarian excesses … I’m not very worried about a ‘Libertarian’ takeover.

(By the way, I have a problem with the name of the Libertarian Party — genuine libertarianism is historically a form of socialistic anarchism, in many respects the opposite of the economic philosophy of the folks who appropriated the name for their political party in the United States.)

Of course, I am retaining the prerogative of changing my mind about which third party candidate to vote for … the Green’s Jill Stein and/or Gary Johnson both have more integrity than either Trump or Clinton, my overarching objective for this election is reform of our political system. Whomever is better positioned in November to further that goal will get my vote.

At this point, August 2016, my snapshot prediction for the presidential election is that barring a major unanticipated event, Hillary Clinton will crush Trump. For Republicans I think the situation is so desperate that their party may not even survive the rubble of the Trump cataclysm.

On the other hand, I hold out hope that Johnson or Stein get a high enough percentage of votes to telegraph to the nation that changes must be made that are meaningful, substantive, and revolutionary.

My forecast for another Clinton presidency is dire: Hillary is Richard M. Nixon redux, she is a scoundrel; and Clintonism is a prescription for social and economic tyranny at the hands of bankers, corporatists, and governing class elitists.

Take a stand and cast a vote for change … the revolution for real people power has to start somewhere at sometime. 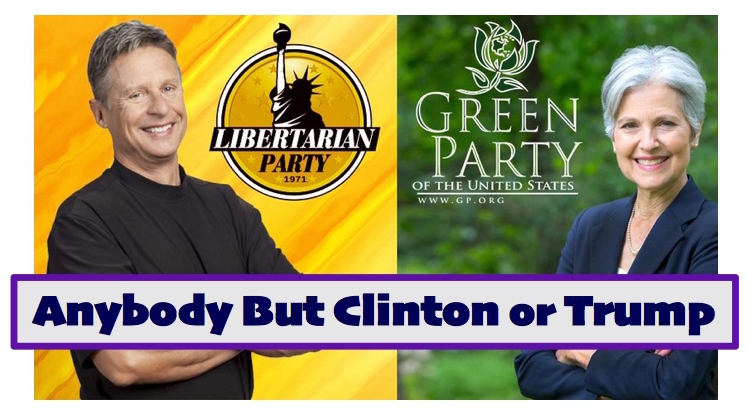