Ever notice that when developers and/or government win -- it's final?

But in the rare cases when grassroots residents, neighborhoods, and taxpayers earn a favorable outcome, the developer/government/special interest always immediately demand another chance! 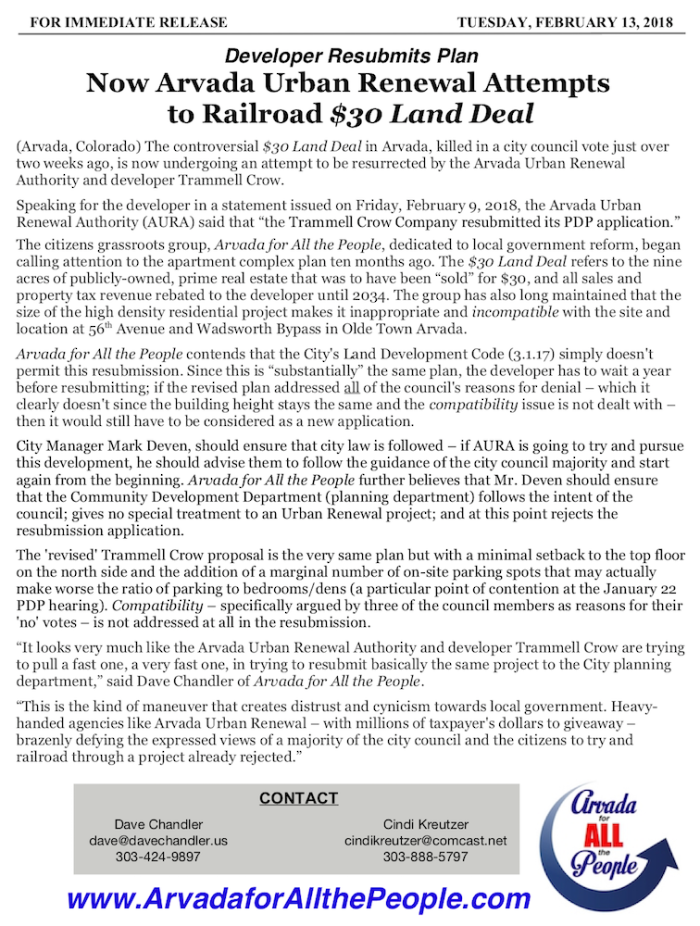 Listen to a discussion about the 'Arvada Urban Renewal Attempt to Railroad $30 Land Deal' on radio AM 710 KNUS - February 14, 2018 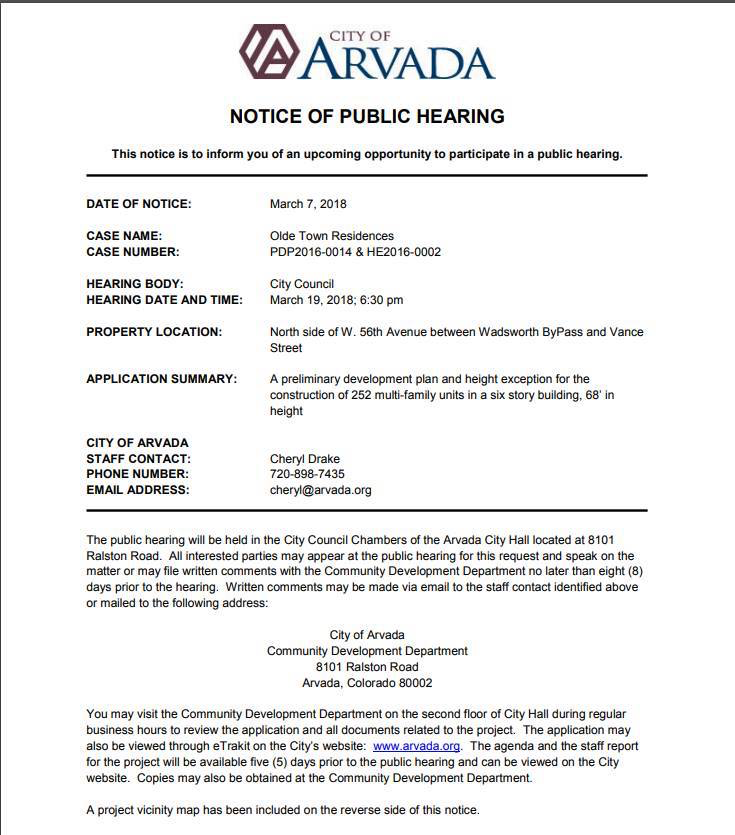 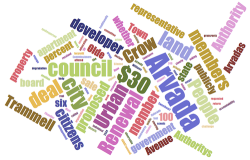 For over a year the citizens grassroots group, Arvada for All the People, worked hard to inform the public and local government officials of serious problems with what became known as the $30 Land Deal.

Nine acres of publicly-owned, prime real estate in Denver’s hot market that was to have been “sold” for $30, and sales and property tax revenue rebated to the developer until 2034. All for the construction of four floors of apartments atop a two story parking garage that would have loomed over already congested Wadsworth Bypass and forever ended the “grand view” from Grandview Avenue.

Now, that plan – instigated and facilitated by the Arvada Urban Renewal Authority (AURA) – has been rejected. On Monday, January 22, 2018, the Arvada city council voted 4-to-3 against the Preliminary Development Plan (PDP) put forth by project developer Trammell Crow.

Arvada for All the People contends that we can learn valuable lessons by reflecting upon the public testimony and council remarks made when the plan was defeated. Indeed, Arvada could have wiser growth and incur less citizen frustration with the pace of change if the following points are seriously considered.

• We ought to have a new sense of pride in our city, in its history and its character, and yes, in Arvada's appeal and marketability. With the current economy in the Denver region, we don't need to subsidize or incentivize any developer or business to come to Arvada, they already want to be here all on their own – that's how sustainable, productive development is supposed to happen in a free market.

• Growth is happening and will likely continue; consequently, we don't need government manipulating the market place in order to hurry it along. In the case of the publicly-owned nine acres of the $30 Land Deal, now that the plan is going back to the drawing board, would it not be wiser to wait until the G-Line is actually running, see what passengers, consumers, and residents demand, and let the free market determine what might be the best development for the site.

• Arvadans care about quality and context – the compatibility of new development with existing neighborhoods and business centers matters. Council members objecting to the $30 Land Deal project stressed that preserving what is unique about Olde Town is important, that means, in our judgement, that city planners should be much more proactive in soliciting, listening to, and incorporating citizen input into development plans.

• Compatibility also means city infrastructure matching growth instead of always playing catch-up. For example, Arvada for All the People hears consistently from concerned residents about hundreds of residential units to be constructed next to clearly inadequate streets with no realizable plans for improvements -- Indiana Street, Ralston Road, 72nd Avenue, Ridge Road, etc.

• Finally, city council needs to assert oversight control over the Arvada Urban Renewal Authority. The idea that a mayor can appoint himself and by now has appointed every member of the AURA Board of Commissioners screams of cronyism. The idea that such a board has the power to obligate millions of dollars of future tax revenue to developers instead of into the City treasury leads to suspicions of dereliction of fiscal responsibility. The notion that AURA can sell public land valued at multi-millions of dollars to a developer for $30 begs for the label of recklessness or worse. City Council needs to put a stop to these kinds of practices.

Furthermore, lack of transparency, accountability, and citizen participation are problems yet to be addressed by AURA. Agreements like the $30 Land Deal are negotiated “behind closed doors”; AURA does not itself hold public hearings or neighborhood meetings when contemplating these projects; and there still does not exist a trustworthy metric for determining whether or not these Urban Renewal plans have (or would) actually be an economic gain or loss for the taxpayers.

The $30 Land Deal controversy can have a prospective outcome that is very positive and enhances Arvada's trust in local government – Arvada for All the People stands ready to engage with City Hall to make our community better and better.