A Single Trash Hauler for Arvada: An Idea Whose Time Has Not Arrived 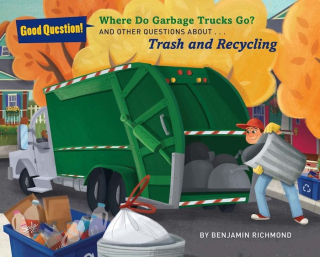 Cover of the book 'Where Do Garbage Trucks Go?'
by Benjamin Richmond

There is an effort here in Arvada for a city government mandated trash collection service. Under this proposal the hauling away of your residential garbage would be done through a city council awarded contract to a single company city-wide or to a single hauler for subdivided districts.

The biggest arguments in favor of this scheme seem to be that a single hauler will increase the participation of Arvadans in recycling; and that one truck a week will cause less air pollution, less noise, and presumably be less destructive of our streets. (Though I now often have more package delivery vans traversing my street everyday than garbage trucks during the whole week.)

There are, however, common sense reasons why the single hauler plan is not a good idea ... at least at this time.

First, of course, is that it takes away consumer choice — the government will decide who picks up your garbage and you will have to pay whatever the selected company decides you will pay.

Second, while there is general consensus that recycling is economically efficient and is good for the environment, there are a couple of problems with the notion that ought to be considered. Recycling would not be mandatory, therefore, under this government program you will be paying to subsidize a recycling service even if you do not participate (for instance, you may choose to handle recycling yourself; see SustainAbility). Taken away will be your freedom to choose a lower payment to a company that doesn’t offer recycling.

Furthermore, there are currently serious nationwide discussions about the efficaciousness of recycling, especially of plastics in light of China’s decision to no longer accept American materials. It would be difficult if not impossible for Arvada government to contractually dictate to a trash collection company that all recyclable materials must be recycled. There will be no way to guarantee to Arvadans that their plastic waste (or any other recyclable waste) will not end up in a landfill anyway.

Third, only corporate out-of-state-owned haulers are likely to have the resources to compete for a single city-wide contract or even for two or three intra-city area contracts. Instead of supporting local trash hauling businesses -- and their profits remaining in Colorado -- Arvadans will be forced to pay fees to a mega-waste corporation.

Consolidation of the trash hauling industry will be furthered by awarding a single hauler contract to a large corporation, ultimately leading to less accountability to customers and, yes, eventually higher prices (that is what monopolies do).

Fourth, a multi-year contract with a single hauler will preclude innovations in trash collection. At this point perhaps it would be more effective for Arvada government to engage with other metro communities to explore the concept of waste-to-energy electrical power plants. Or perhaps engage in discussions with Denver to participate in an expansion of their Denver Composts program. Or, Arvada government could consider incentives to trash collection businesses already operating in the city to use quieter, more fuel efficient or alternative fuels trucks.

Finally, the political component of how this single hauler plan should cause concern. Can we trust the Arvada city council — as it is currently constituted — to consider the best interests of the citizens as a whole when awarding such a large contract?

As they say, “the devil is in the details” and with such a consequential decision -- that will affect every single resident of Arvada -- these details must be fully debated. Drafting a contract for a single hauler would be fraught with peril and require a diligence that this council has not shown itself to be adept with, for example:

A few articles I have found informative:

Monopoly and the U.S. Waste Knot - Institute for Local Self-Reliance

Malaysia to send back plastic waste to Western countries - NBC News; May 28, 2019

Why America’s recycling industry is in the dumps - CBS News; October 10, 2018

Global Warming Crisis: Our Only Course Now is Mutual Action

It is simple and straightforward. 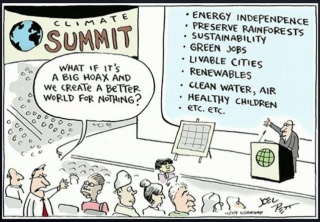 The era of the carbon fuels free lunch socio-economic experiment is drawing to a close -- there is no such thing as a free lunch -- now we have to pay. And we should boldly do it while being grateful for the many advantages and benefits we have thus far received from coal, petroleum, and natural gas.

We know what is causing global warming: scientists have examined all of the variables -- it isn't volcanoes or the Sun -- it is nearly 8 billion human beings on the planet and the emission of greenhouse gases into the atmosphere. ( What's Really Warming the World? )

It is a crisis because of the rapid rate greenhouse gases are accumulating in our atmosphere -- this is measurable, it isn't controversial. However, this explains why shrugging off this phenomenon with a "we'll adapt" excuse is and will be destructive of humanity. ( Climate Change: How Do We Know? )

The two hundred year human adventure in a completely carbon-based culture is coming to an end ... one way or another. To do nothing will be vastly more expensive than affirmatively adopting a 'can-do' approach to dealing forthrightly with this crisis.

Common sense makes global warming evident ... as I have written many times before. We have indeed derived tremendous benefits from fossil fuels, our modern technological society; however, there is no such thing as a free lunch. In the course of just two hundred years we have burned up literally millions and millions of years of solar energy stored in the form of fossil fuels, we humans have done that -- there are negative consequences and they are evident.

Almost a quarter of the West Antarctic Ice Sheet can now be considered unstable, according to a new assessment of 25 years of satellite data.

By unstable, scientists mean more ice is being lost from the region than is being replenished through snowfall.
Some of the biggest glaciers have thinned by over 120m in places.

Losses from the two largest ice streams - Pine Island and Thwaites - have risen fivefold over the period of the spacecraft observations.

And the changes have seen a marked acceleration in just the past decade.

The driver is thought to be warm ocean water which is attacking the edges of the continent where its drainage glaciers enter the sea.

It was 84 degrees near the Arctic Ocean this weekend as carbon dioxide hit its highest level in human history
Boston Globe/Washington Post - May 14, 2019

Near the entrance to the Arctic Ocean in northwest Russia, the temperature surged to 84 degrees Fahrenheit (29 Celsius). Meanwhile, the concentration of carbon dioxide in the atmosphere eclipsed 415 parts per million for the first time in human history.

... Saturday’s carbon dioxide measurement of 415 parts per million at Hawaii’s Mauna Loa Observatory is the highest in at least 800,000 years and probably over 3 million years. Carbon dioxide levels have risen by nearly 50 percent since the Industrial Revolution.

More plants and animals are threatened with extinction now than any other period in human history, it concludes. Nature's current rate of decline is unparalleled, and the accelerating rate of extinctions "means grave impacts on people around the world are now likely," it says.

... ocean ecosystems are degrading as temperatures rise toward 2 degrees Celsius - 3.6 degrees Fahrenheit - above preindustrial levels, the study warns. Coral reefs lost to warming and acidifying oceans could cause a collapse in commercial and indigenous fisheries, affecting billions of coastal residents who rely on seafood for protein.

... "The most important thing isn't necessarily that we're losing .. 1 million species - although that's important, don't misunderstand me," Watson [Robert Watson, a British chemist who served as the panel's chairman]  said during a teleconference Sunday.

"The bigger issue is the way it will affect human well-being, as we've said many times - food, water, energy, human health.

The pace of anthropogenic global warming is increasing; the repercussions becoming starkly evident; the costs are mounting. Embracing climate denial is a fool's delusion, doing nothing is idiotic. We have to be smart, wise, and act -- we are all in this together.

Climate Change and the Role of Uncertainty
NeuroLogicaBlog/Steven Novella - March 14, 2019

Global warming deniers use this uncertainty as an excuse to do nothing (doing nothing always seems to be their goal, regardless of the justification). As a physician, that logic is painful. If I am not sure that my patient has a serious condition, that is not a reason to do nothing, it creates an imperative to do something. The specific intervention is then based largely on a risk vs benefit analysis. And often, as with global warming, acting early is key. You definitely want to find that tumor when it is small and before it has metastasized.

A recent study published in Nature Climate Change takes a similar approach by looking at many (literally millions) different pathways the climate might take between now and 2100 based upon all the variables that affect climate and various actions we might take. Just as I often do with my patients, they ask, “Is there a potential pathway to an acceptable outcome?” The more time we waste, the more our options are limited, and the more the potential pathways close in on us.

“Despite massive uncertainties in a multitude of sectors, human actions are still the driving factor in determining the long-term climate. Uncertainty is sometimes interpreted as an excuse for delaying action. Our research shows that uncertainty can be a solid reason to take immediate action,” said Lamontagne.

Exactly right. I make this exact point to my students – your uncertainty is not a justification for doing nothing. It’s the opposite – uncertainty means we need to be more careful, consider all possibilities, and make sure we are covering the worst outcomes.

What Changed My Mind About Climate Change?
Risk management is not a binary choice.
The Bulwark/Jerry Taylor - May 21, 2019

Our only course now is mutual action.

It is important in this mutual action to remember that individuals and families still have to make a living ... a "we know what is best for you" attitude from those of us advocating for dramatic policy changes will be just as destructive as climate denial. The political components have to be considered, economic ramifications especially for poor and working folks have to be factored into our action plans. Wise choice of battles will have to be made and understanding that the trivial should not be elevated to the truly consequential if we are to be successful in implementing life saving environmental programs.

We are now at a point where individual action while commendable is not sufficient; we have to take large mutual steps now merely to mitigate the climate change that has already happened. Concept programs like the Green New Deal have to be negotiated and effectuated; partisan politics put aside for the survivability of our posterity. Engagement in the political process, your voice, and your vote are the most critical things you can do to ensure a livable future for yourselves and future generations of human beings on planet Earth.

We are running out of time.

This graphic explains why 2 degrees of global warming will be way worse than 1.5
Vox - October 7, 2018