« A Single Trash Hauler for Arvada: An Idea Whose Time Has Not Arrived | Main | More Verification: Humans Cause Global Warming »

We All Have to Pay: The Carbon 'Free Lunch' Era is Over 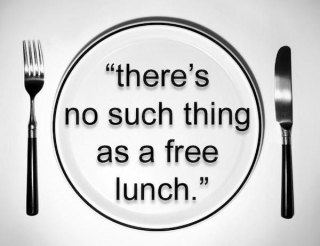 The most important thing you can do as an American is vote for candidates committed to international and national policies to deal forthrightly with global warming. Personal actions are admirable, but we are now at the point where we must act together, globally, for the benefit of our posterity. That's all there is to it.

The carbon 'free lunch' socio-economic experiment is over.

For all the positives humanity has gained from fossil fuels -- nothing is free -- there is a price to pay. We are not off the hook for the effects of burning millions of years of stored solar energy in just over two centuries ... just because we did not have sufficient foresight to anticipate the cost does not mean that the bill is not due. It is simple common sense and no amount of denial or political obstinance will alter reality.

Here I link to some particularly salient information to further an understanding of what is going on, what is at stake, and hopefully motivate all of us to do the only thing we can to preserve ourselves and future generations: organize, vote, and support mitigation policies. We are all in this together.

Weather is explained by climate ... and we are witnessing changes in weather patterns and in the intensity of weather phenomenon that demonstrate the effects of anthropogenic global warming.

This video explains this succinctly.

Last month was the hottest June ever recorded — as climate groups warn of an ‘ecological emergency’
CNBC - July 3, 2019

Soaring temperatures worldwide made last month the hottest June ever recorded, according to data collected by the EU’s satellite agency.

Data provided by the Copernicus Climate Change Service (C3S), which is tasked with providing comprehensive climate information for the EU, showed global average temperatures for June 2019 were the highest on record for the month.

Anchorage experienced higher than average temperatures nearly every day of June, reaching a balmy 80F on days that once maxed out at a mild 67.

The weather is forecasted to heat up further through and after the Fourth of July, with temperatures expected to climb to nearly 90F in Fairbanks and Anchorage over the weekend.

If the forecasts are correct, the state could set several new local heat records before the week is out.

CO2 emissions are on track to take us beyond 1.5 degrees of global warming
ScienceNews.org - July 1, 2019

A new study shows just how hard it may be to limit global warming to 1.5 degrees Celsius over preindustrial times.

The world’s existing power plants, industrial equipment, vehicles and other CO₂-emitters are on track to pump out enough carbon dioxide to blow past that target by midcentury, researchers report July 1 in Nature. Add in future power plants that are already planned, permitted or under construction, and we could emit enough by 2033 to raise average global atmospheric temperatures by 1.5 degrees, the researchers say. ...

... Human activity has already increased global temperatures by 1 degree. Emitting an additional 420 to 580 gigatons of CO2 could warm the planet to 1.5 degrees above preindustrial levels, the Intergovernmental Panel on Climate Change estimated in 2018. Current infrastructure could emit that much CO2 between 2018 and as early as 2035, though it could take until 2046 to reach those totals, the new study found.

Rising heat due to climate change could lead to the loss of 80 million jobs by 2030, with poor countries worst hit, the United Nations said on Monday, as Europe sweltered in record temperatures.

A temperature rise of 1.5C by the end of century could lead to a 2.2% drop in working hours - equal to 80 million full-time jobs - costing the global economy $2.4 trillion, according to projections by the U.N. International Labour Organization (ILO).

And ... cognitive dissonance for climate change deniers who are also aggrieved about immigration: these realities are mutually inclusive. There is no such thing as a 'free lunch'.

Climate change and immigration have become more inextricably linked than ever. As of the end of May in fiscal year 2019, almost 150,000 migrants from Guatemala traveling with family members had been apprehended at our southwest border. That represents roughly 1% of the country’s total population. While there are a number of reasons driving this migration, including violence, poverty, and corruption, researchers now believe that climate change represents a significant underlying factor. In Guatemala, Honduras, El Salvador, and Nicaragua, 2.2 million people have lost their crops due to excessive rain and drought, according to the World Food Programme. These are also some of the world’s most susceptible countries to drought.

Rising temperatures have severely impacted weather patterns, rainfall, soil quality, and crops’ vulnerability to disease, and thus have had a significant negative effect on farmers and local economies. Since 1950, the average temperature in Central America has increased by 0.5 degrees Celsius, and it is projected to climb another 1 to 2 degrees by 2050. More broadly, data also shows that global migration due to climate change will only grow in the years ahead. According to the World Bank, climate change could displace as many as 140 million people by 2050 in Latin America, sub-Saharan Africa, and South Asia.

This is only a preview. Your comment has not yet been posted.

The letters and numbers you entered did not match the image. Please try again.

As a final step before posting your comment, enter the letters and numbers you see in the image below. This prevents automated programs from posting comments.

Having trouble reading this image? View an alternate.

(You can use HTML tags like <b> <i> and <ul> to style your text. URLs automatically linked.)

(Name is required. Email address will not be displayed with the comment.)