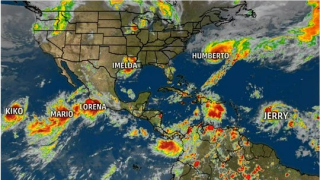 The United State is the largest per person emitter of carbon dioxide in the world ... and we have been for decades.

No more passing the buck or making excuses.

We change our behavior or we invite massive disruption and suffering.

We have derived tremendous benefits from fossil fuels, our modern technological society; however, there is no such thing as a free lunch. In the course of just two hundred years we have burned up literally millions and millions of years of solar energy stored in the form of fossil fuels, we humans have done that -- there are negative consequences and they are evident. Denying or resisting the common sense evidence of global warming is foolish.

Agitate.
Vote.
Encourage and support mutual action to mitigate global warming.
We are all in this together.

The climate crisis explained in 10 charts
From the rise and rise of carbon dioxide in the atmosphere to possible solutions
The Guardian - September 20, 2019

This GIF captures just how gigantic the U.S. carbon footprint is
Grist - April 23, 2019

CO2 Emission Per Capita
Our World in Data

For nearly 40 years, the massive computer models used to simulate global climate have delivered a fairly consistent picture of how fast human carbon emissions might warm the world. But a host of global climate models developed for the United Nations’s next major assessment of global warming, due in 2021, are now showing a puzzling but undeniable trend. They are running hotter than they have in the past. Soon the world could be, too.